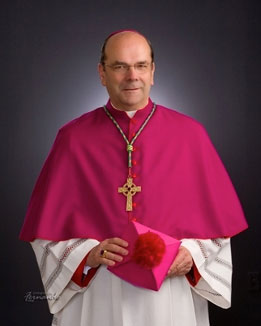 Bishop Robert J. Cunningham, son of the late Cecil and Grace Cunningham, was born and raised in Buffalo, New York. He received his early education at St. John the Baptist Parish Elementary School and the Diocesan Preparatory Seminary, Buffalo. His college and seminary education continued at St. John Vianney Seminary, East Aurora, where he earned both Bachelor of Arts and Master of Divinity degrees. In 1978 he received a Licentiate Degree in Canon Law from Catholic University of America.

Bishop Cunningham was ordained to the priesthood by Auxiliary Bishop Bernard J. McLaughlin on May 24, 1969 at St. Joseph New Cathedral in Buffalo. His first assignment was associate pastor at Blessed Sacrament Parish, Kenmore. In 1972 he became the assistant pastor at his home parish of St. John the Baptist, Kenmore.

He was named secretary to Bishop Edward D. Head and assistant chancellor of the Diocese of Buffalo in 1974. Upon the completion of his Licentiate Degree in Canon Law, Bishop Cunningham was named a judge in the marriage tribunal and vice-chancellor of the diocese. He was named a Monsignor by Pope John Paul II in 1984. In 1985 he was appointed chancellor for the diocese and the following year, vicar general. In January 2002, Bishop Henry J. Mansell named Bishop Cunningham pastor of St. Louis Church in downtown Buffalo. In December 2003, the diocesan College of Consultors in Buffalo elected him diocesan administrator, a position he held until his installation as the Bishop of Ogdensburg. On March 9, 2004 His Holiness Pope John Paul II appointed Msgr. Robert J. Cunningham as the 13th Bishop of Ogdensburg. Bishop Cunningham was ordained and installed as the Bishop of Ogdensburg on May 18, 2004 at St. Mary’s Cathedral in Ogdensburg.

Bishop Cunningham has served on a number of boards including Catholic Charities in the Diocese of Buffalo and the Diocese of Ogdensburg, Baker Victory Services in Lackawanna, NY, the Cantalician Center in Buffalo, Board of Managers of St. Joseph’s Home in Ogdensburg and the Board of Trustees of the former Wadhams Hall Seminary College in Ogdensburg. The Bishop was also a charter member of the Kenmore Mercy Hospital Foundation Board. Bishop Cunningham has served on the board of trustees of Christ the King Seminary in East Aurora, NY. And currently serves on the Board of Trustees of St. Mary’s Seminary & University in Baltimore.

Bishop Cunningham was presented with an honorary doctorate in humane letters from Niagara University, Niagara Falls in 1991 and St. John’s University, Staten Island in 2007 and Canisius College in 2009. The Kenmore Mercy Hospital Foundation Board honored him for his years of service with the Sister Mechtilde Award in 2004. In 2008, Bishop Cunningham received the Cure of Ars Award from Christ the King Seminary.